A rare excample of an early Regence subpattern turned on so-called "rose lathe engine". The subpattern owes its name to the famous 1780 French encyclopedia compiled Diderot and d'Alembert where it illustrates the article about chess. It is still unclear when they started to make sets like that but obviously it had to be widespread and common to reach encyclopedia. The technology was available from the 16th century but it is hard to believe that the same design could have been produced for 200 years (compare the pattern of 1780 to the Regence set made in 1980). If the triangular Knights represent tricorne hats then it cannot be earlier than mid-1600s when seamen started to use them. Many people think that the triangular finials have nothing to do with these hats, though. A safe guess should be 18th century, possibly earlier.
A good explanation about the rose engine can be found here.
The set is made of boxwood and stained with tobacco which was the most common way in these days. Much of the stain is faded. 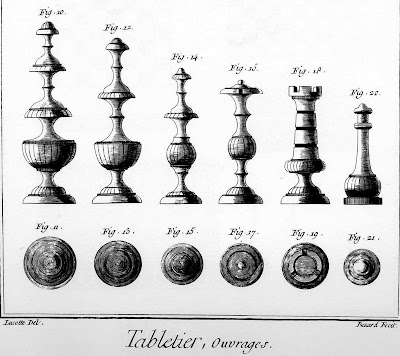 Illustration from the Encyclopedia. 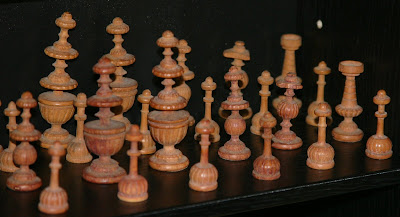 An interesting question about these sets is, which piece is Knight and which Bishop. Weirdly enough, it is far from certain.

The illustration above lines the pieces up in the order which we all are accustomed with. But the legend page from the same book tells us otherwise: 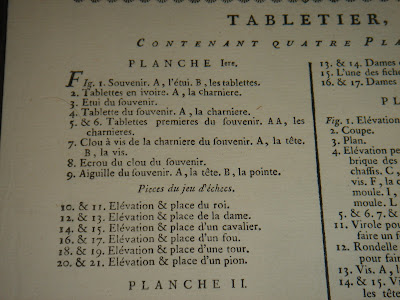 According to this, the pieces with tricorne finials are Bishops (Fou), not Knights.

However, if a Regence set has figural Knights, then Bishops look like Knights from an Encyclopedia set. Have a look at following pictures: 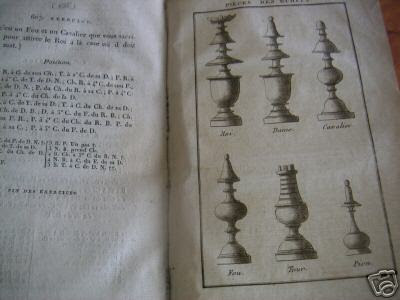 A picture from Hocquart's Traite d'Échecs (1810)
Note that the pieces are presented in the same order as in Diderot's encyclopedia. Queen, Bishops and Pawns have identical finials (small balls).

Another rose-engine set, picture from Offenbach 2005 Teil I ~ Die Ausstellung ~ Schach - ein Spiel der Vernunft in Offenbach am Main, Im Haus der Stadtgeschichte vom 19. März - 8. Mai 2005, ISBN 3-00-015869-3, page 27. Knights and Bishops look exactly how we are used to see them. Thanks to Alan Dewey and Joost van Reij for the reference and picture editing.

Many sets from the late 18th century or 19th century feature Bishops with small ball finials like Queens but having triangular collars and Knights with horse heads.

As my set looks exactly like in the encyclopedia of Diderot and d'Alembert, the pieces with triangular finials are most probably Bishops, not Knights and the photographs above show wrong setup. However, other early Regence subpatterns have Bishops similar to the Knights of my set.

Bishops with tricorne finials can also be found in early Spanish sets: see examples from Crumiller collection and Rocheford collection. The same is true about Italian sets (Witticke collection).
Posted by Owner at 8:19 AM 2 comments: