Some words on small German sets

Small German sets and rollup boards were imported to England in remarkable diversity. Sometimes the sets carry the labels of English retailers, but they still come from Germany (an example from Crumiller collection).

The lid of the larger box has words "CHESS AND DRAUGHTS BOARD". 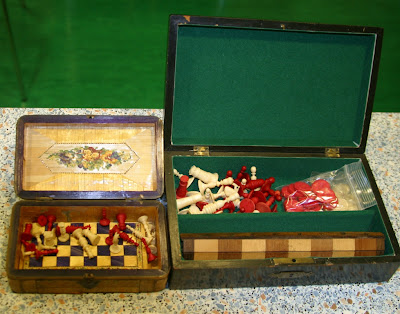 The larger set seems to be definitely German. It is known that roll-up boards were imported to England in the 19th century.

However, it seems to be that the smaller, truly miniature set follows exactly the same pattern. Only Knight heads are different. The sawed-out Knight heads similar to the miniature example above are often recognized as German.

Update July 14 2009: The common knowledge that these Knights are German is solidly based upon German pattern books. For example, this page from the Nuremberg manufacturers H. Heerdegen and C. Gottlieb dates from around 1870. The designs are fancier than my sets but the common attributes are easy to see. Many thanks to Jan for the information. 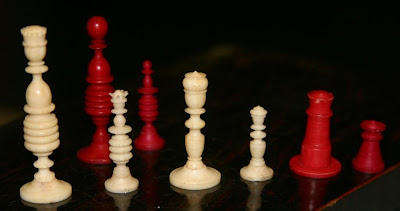 Another look at the major pieces with very similar fnials. 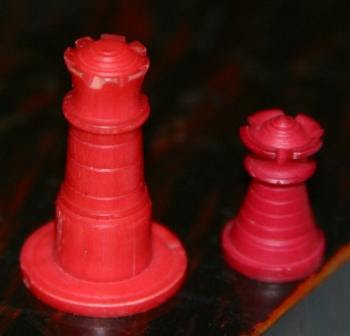 Both Rooks feature raised finials with concentric rings and rather wide bases. 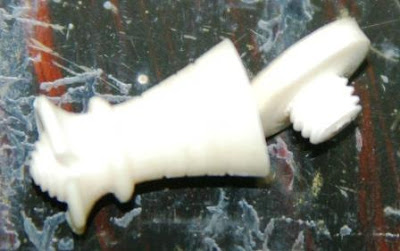 The Rooks of the miniature set have bases which screw off. This is unusual. 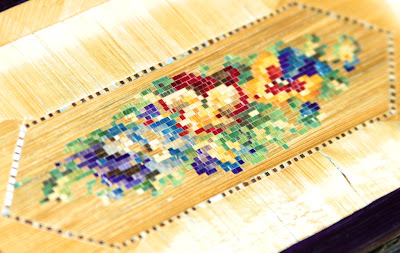 Straw work on the lid of the smaller box. Although lots of straw work was done by the Napoleonic POWs, it was widely used in many European countries from the mid-1700s to late 1800s. The assumption that all straw work should be associated with Napoleonic POWs is not correct.

The similarities of the pieces suggest that both are German and come from the 19th century. While urn-shaped stems of English sets indicate early manufacture, it is not necessarily true about German sets. Many design elements continued to exist in Germany long after they were discarded in Great Britain. These include open cups (Selenus design runs well into the 20th century while the last English sets resembling open cup are the so-called Calvert or fountain sets from the 1st half of the 19th C) and urn-shaped stems.

Update July 30 2008: CCI newsletter "The Chess Collector" (4-5/1 Jan 1990) features an article about German sets by Franz Josef Lang. The author points out that the mid-1800s pattern book of Nurenburg turner A. Kolb has labels "American", "German" and "Roman" under the designs ("American" designs have mitred bishops common in Anglo-Saxon sets) and assumes that these indicate the target markets for these designs.

Update 2010: Please note that none of the sets above do not belong to my collection any more. The article was left up for discussion on the German sets.
Posted by Owner at 6:18 AM 4 comments: