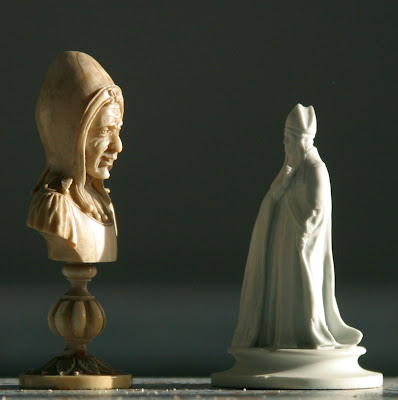 Two high-end figural Bishops from around 1800: a French ivory (possibly Dieppe) bust piece in the form of a clown (left) and a Wedgwood jasperware porcelain figure (right).
The ivory piece is extremely well carved. Bishops became modeled as clowns as anti-clerical winds blew over France in the end of the 18th century.

The Wedgwood pieces were designed by John Flaxman in the 18th century using famous actors from Shakespeare's "Macbeth" as models for King and Queen.

Can two designs of the same period differ more? 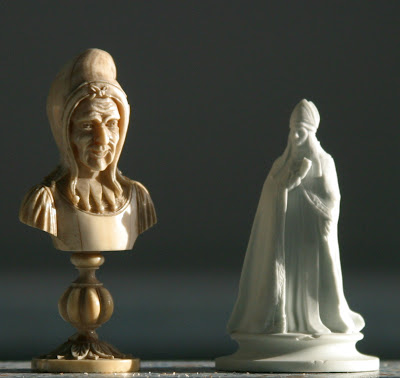 The ivory Bishop was accompanied with a red Pawn from the same set. Complete sets of this age and quality would cost well over £5000 for each. 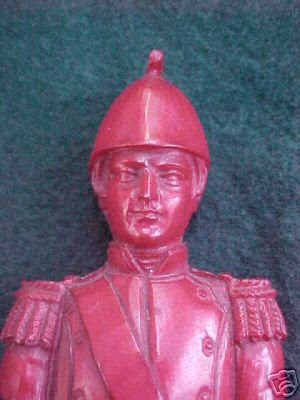 Update April 14 2008: It has turned out that the ivory pieces are made of mammoth ivory. Mammoth ivory was widely used in the 18th-19th C. Professor Fersht has provided a good reference about this:

“The reader may perhaps be surprised on being told that Sheffield alone requires its annual slaughter of something like 22,000 elephants. Still the demand continues, and the cunning of the Africa and Indian huntsmen does not desert them. Yet it is not to be supposed that the elephant supplies all the ivory for which such an enormous demand exists. The mammoths and animals of past times have bequeathed us large stores of tusks which have gone some way towards fossilisation. Eastern Liberia and the Arctic marshes abound with this ivory, which is of less value than recent ivory, and is used more by the Continental ivory-workers than by our own.” 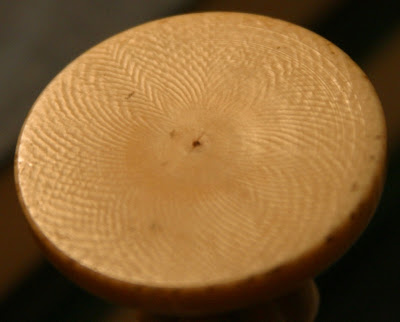 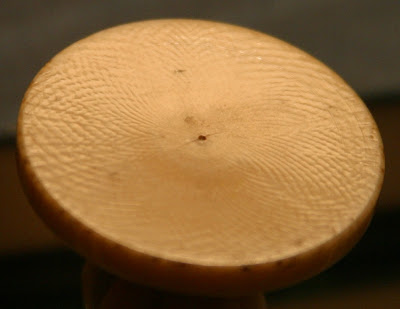 Sharp angles in grain are characteristic to mammoth ivory. A good article on the subject can be found here.
Posted by Owner at 2:55 AM